skip to main | skip to sidebar

An existential trip through the realms of Belief, Mistrust, Hope and Desire
Marcus Graf 2007

Do you believe in religion? Do you believe in science? Do you believe in money? Do you believe in historical narratives? Do you believe in fairy tales? Do you believe at all? Banu Birecikligil’s paintings are a subjective research of her inner and outer reality, in which she merges collections of exterior information with an artistic analysis of ratio and emotion. The works expose the complexity of reality and show the impact of its increasing heterogeneity and plurality on concepts like meaning, knowledge and absolute truth, which guaranteed the absolute sureness of existence per se. You cannot “read” Birecikligil’s paintings due to the absence of any linear story or message. The works resemble puzzles where pieces are missing, movies where scenes have been cut or stories where paragraphs have been forgotten. Therefore, meaning e.g. becomes relative, a subjective action, in which the spectator is forced to actively construct their own reality. This play with various layers of reality was already subversively present in her earlier works, where a strange mix of fantasy and reality revealed our social paradoxes through the combination of beauty and kitsch, high culture and low culture, as well as superficial decoration and philosophical meaning. Strange incidents disturbed the peaceful sceneries of people’s everyday life. The outcomes of these collages of childhood reminiscences and present glimpses were unpredictable. Now, in her current series, she is focusing on the distortion of reality by erasing the human protagonists and replacing them with toys, dwarfs, fantastic animals, Santa Claus and other non-human beings. Alone and isolated, they are surrounded by a strange emptiness, which creates a feeling of melancholy and loneliness. The translocation of the figures into the vacuum of the background gives the scenes a time/space-lessness, which underlines their fantastic absurdness. Banu Birecikligil’s paintings contain an odd retro-flavor, which brings us back to our childhood; a time when “Nothing is impossible” was not only an advertising slogan. Though, every memory is an unfinished construction, in which reminiscences are the mix of reality, illusions and wishes. That is why the paintings follow an aesthetic of imperfectness, where the spectator has to fill in the blanks by traveling back in their memory and exploring the forgotten images of their past. 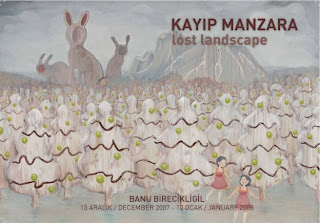 The anti-aesthetic of the works results from the combination of an anti-linear conceptual approach and an anti-expressive painting style. It distorts our visual perception, which is polluted by the visual garbage of the over-polished aesthetic of the advertisement industry and the image pool of the capital. Her works are fragmented like our reality and strange like our dreams. Shifting between being awake and asleep, they are individual recollections and alternative reconstructions of reality. The paintings resemble open doors, which provide entrance into an altered state, where the border between illusion and life is not patrolled by the security guards of knowledge and ratio. There, the spectator has the chance to step out of their usual context in order to reflect on themselves from a distance. The results are surprising. Have a safe trip home…